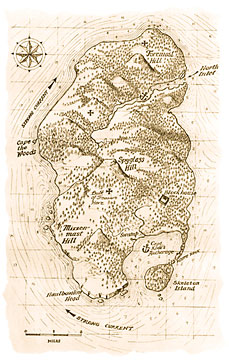 CARTOGRAPHIC
DESIGN & PRODUCTION
SINCE 1968…
ALL DIGITAL SINCE 1987

From 1968 through 1988 we produced maps using traditional mechanical techniques —pen & ink, watercolor, scribing, amberlith, etc. In 1987 we were among the first to produce commercial Postscript maps on a Macintosh platform. Since then we have designed and produced new digital map programs for Fodor’s Gold Guides, Let’s Go Budget Guides, Fodors City Guides, Flashmaps (New York, Washington DC, Boston and San Francisco), and the Hamptons Handbook.

CUSTOMIZED TO YOUR DESIGN
We customize the style of maps and related illustrations to the design of each project. We can produce travel, historical, thematic, topographical, reference, or imaginary maps in a wide variety of technical and painterly styles. Our typographic solutions usually echo the design of the overall publication. Any maps we produce for you can be tailored to your specific design preferences.

PRODUCED IN ILLUSTRATOR, PHOTOSHOP & QUARK XPRESS
Most of our jobs are produced on the Mac using Adobe Illustrator, Photoshop, and Quark XPress. In some cases, it may be desirable to create a painted or drawn base, which is then scanned, edited in Photoshop, then placed in Illustrator for additional linework and type.

SELECTED TRADE BOOKS—Since 1971, we have created custom maps for such trade books as:

•The Memory Palace of Mateo Ricci, Modern China and The Emperor of China, all by Jonathan Spence
•Rome and England’s Green and Pleasant Land, both by Kate Simon
•The Great War and Modern Memory, by Paul Fussell
•In The Spirit of Crazy Horse, by Peter Matthiessen
•The Skyscraper Style, by Robinson & Bletter
•Arctic Dreams, by Barry Lopez
•The Immobile Empire, by Alain Peyrefitte
•Great Expectations, Kidnapped, Tess of the D’Urbervilles, and Treasure Island, all for Reader’s Digest
•Desperados, by Ron Hansen
•The Forgotten War, by Clay Blair
•River, by Colin Fletcher
•To End A War, by Richard Holbrooke
•Cairo, The City Victorious, by Max Rodenbeck
•The Hot Zone, by Richard Preston
•All God’s Children, by Fox Butterfield
•God’s Chinese Son, by Jonathan Spence
•A Good Year To Die, by Robinson & Bletter
•Bury Me Standing, by Isabel Fonseca
•Savages, by Joe Kane
•Ends Of The Earth, by Robert Kaplan
•The Brothers, by Lesley Downer
•Beautiful Loot, by Akinsha and Kozlov
•Armageddon, by Clive Ponting
•Antarctic Navigation, by Elizabeth Arthur
•and diagrams for How To Read A Film, by James Monaco

See “News & Links” for our most recent projects